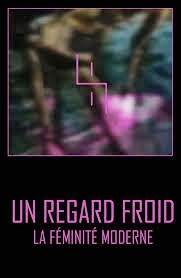 “Another solid dose of dark power electronics and industrial heaviness infused with psycho-sexual dysfunction and cold erotic imagery, La Feminite Moderne is the second cassette from the obscure French Canadian project Un Regard Froid, the solo effort of Quebecois industrialist Frédérick Maheux. Also a member of the performance art ensemble Influx LASN alongside Pierre-Marc Tremblay of Akitsa / Åmes Sanglantes / Contrepoison infamy, Maheux here focuses his energies on a series of contemptuous sonic assaults that initially take form as an immensely blown-out industrial noise assault that incorporates some aspects of classic power electronics and extreme harsh noise alongside the use of some extremely heavy, pummeling mechanical dirges. Having not heard any of the previous recordings that Maheux has released with Un Regard Froid, I initially was expecting something more along the lines of a straightforward power electronics assault based on what little I had read about the project. Instead, the first track on La Feminite Moderne (“Pro-Ana”) proceeded, after a lengthy spoken word intro, to grind its spiked heel into my skull with a kind of crushing, pneumatic heaviness that, for a moment, almost feels like it could have been something that would have appeared on Justin Broadrick’s old HeadDirt label back in the early 90’s. That track features some heavy machine-like rhythms that clank and pound loudly and violently in the depths of Maheux’s mix, as blasts of roaring distorted guitar and controlled bursts of static-drenched noise continue to transform this into a stark sort of industrial dirge, heavy and monotonous and powerful. After that, though, the tape shifts its focus onto more straightforward destructive noise assaults like “Dans Ta Peau”, which resemble the more intense junk-noise exercises of artists like K2 or Maaaa. Following that, Maheux explores the contrast between extreme feedback and distorted synth abuse on “Trigger”, which ultimately returns to a form of that mechanized rhythmic crush, and then moves on to the to the final track “Dépendances Comportementales”, where he engages the listener in a haze of hissing, eerie power electronics that slowly unfold across the final minutes of the cassette. Not at all what I expected from this project, this ended up being a lot more interesting than first presumed, and has turned into one of my favorite of Nil By Mouth’s recent releases.”