At the front row of the heat death of the universe, I went on my personal warpath.

Physical releases of Un regard froid’s Palinodie (Anticinéma) will be available in the coming months. Stay tuned. 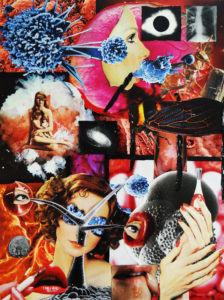 I also finished the first cycle of collages for my new series named Flesh Intolerance. I posted low-quality and partial pictures of them during the summer on Death Orgone’s Instagram, but that documentation has nothing in common with the impact of the final objects. Heavily inspired by transhumanism, gene splicing, CCRU and body horror. More info later this Fall…

Also dusted my analogic video devices for a live performance with Xarah Dion on August 11th, opening for Sarin and Hide (great set from them). I’m very satisfied with the result.

The blog L’emergere del possible published this very interesting interpretation of my short film Code -><-Virus. It’s in Italian but well worth your Google Translate time.

Other projects are well advanced, but I must keep silent about them. V.I.T.R.I.O.L.

I also decided to quit cinema/video art in general. I intend to focus on other types of media more suiting my interests and aesthetic.